Power surety and energy resiliency are essential for correctional facilities since they operate as small cities, providing housing, food service, educational programs, and 24/7/365 correctional oversight. The availability of electrical energy at the Santa Rita Jail (SRJ) is essential for the Alameda County Sheriff’s Office to provide a safe and secure environment for inmates and staff. Prior to implementation of the SRJ microgrid project, significant power disruptions would occur throughout the facility during grid outages, even when all safety systems were operating properly. Surprisingly, this is fairly typical of most facilities that operate conventional emergency backup generation systems.

During a typical grid outage, the facility would completely lose electricity and “go dark” for 15 seconds before the jail’s two 1.2 MW diesel generators were brought on line. In 2006 alone, Santa Rita Jail sustained three extended utility outages that lasted a total of 88 minutes. And that was in addition to the shorter-term outages that occurred periodically. In 2002, the correctional facility had to endure a 5-hour utility outage that was disruptive and had the potential for placing deputies and staff in harm’s way. Due to the facility’s reliance on electronic systems to accomplish essential mission activities throughout the site, the decision was made to investigate a whole-site microgrid approach to mitigate utility outage risk.

To increase the safety of officers, staff, and inmates – and by leveraging multiple funding sources and contracting approaches – a comprehensive advanced microgrid was developed to shield the Santa Rita Jail facility from momentary utility outages and power quality events that were increasing in frequency. Key to the development of this approach was the utilization of disparate and standalone generation assets that existed at the site. Large fuel cells and renewable solar PV systems that had the potential to augment the existing diesel generators during an extended island event had been installed through previous energy projects. However, the existing generation assets were unable to operate in parallel during grid outages.

This problem is typical of many previously-installed renewable energy systems. As the result of voltage and frequency limits that function during transitions, standby diesel generators have insufficient stability to prevent anti-islanding functions on PV or fuel cell inverters from tripping. These trips cause the renewable generation systems to go offline and the facility is unable to utilize them when needed the most.

Microgrid modeling is an essential part of project development efforts to ensure proposed designs are sufficiently balanced for reactive and real power flows during various configurations of grid-connected and islanded operations.
. 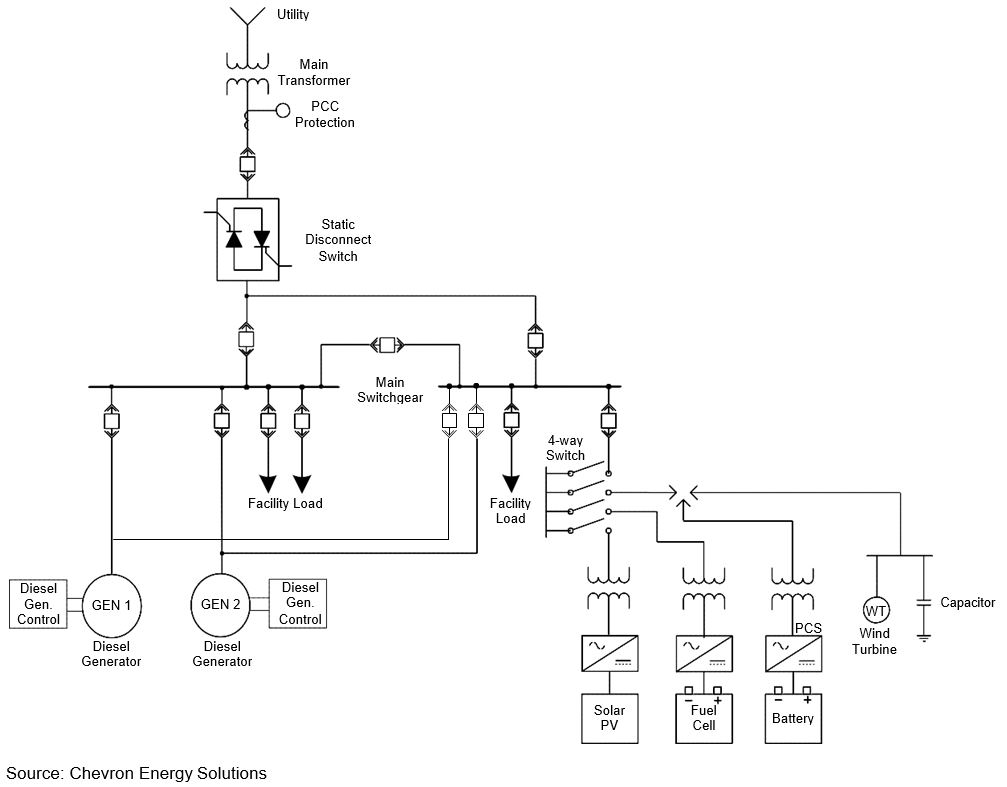 The following design and operational elements are employed on the SRJ microgrid:

2. Each CERTS-controlled generator participates in the power balance of the islanded microgrid using a power vs. frequency droop controller. The battery and the diesel generators have frequency and voltage control responsibility.

3. The fuel cell and the photovoltaic inverters run in a power mode that does not track load or control voltage or frequency.

4. In the event there is insufficient generation available to meet the load during an islanding event, the frequency will drop below the prescribed threshold, and a trigger sent to non-critical loads to shed.

PowerSurety staff, who at the time were employees of Chevron USA, were called-in to help model and independently validate the microgrid electrical topology. Transient stability analyses were performed with various disturbances and faults simulated to ensure power quality was within operating limits for critical loads and was stable during transition events to and from the grid. Key to this modeling and analysis was determining electrical impacts of the microgrid autonomously islanding from the utility grid and assessing voltage and current characteristics during those times.

Analytical models of both the advanced energy storage (battery) and the medium-voltage static discharge switch were necessary for incorporation into the eTAP® electrical models. The modeling peer reviews confirmed a design basis that would enable the jail’s ability to autonomously island and optimize onsite distributed generation resources to decrease the total cost of energy purchased from the utility while significantly improving energy resiliency.